Joseph J. Sawyer’s legacy rested largely in the Florida AME Church. He stood as a pioneer of the church and as a reverend who pushed for the funding of the denomination’s first church school in the state–Florida Divinity High School (Jacksonville, FL). I also wanted to research his work beyond the church and his early life in the states of North Carolina and Virginia. With Project Discover Freedman, I found multiple primary records detailing pieces of his time in the state of Virginia. Although, parts of his life remain a mystery, what is known is his commitment to the advancement of his people.

The Census Returns of Colored Population of Prince Anne County, Virginia placed Sawyer in the state as early as 1866. Census collector marked slave as Sawyer’s status on January 1, 1863. His age—under 50, over 20. His race—Black. His former master—R. Baker, state unknown. His current occupation—laborer. His intelligence—unable to read, yet Bureau’s records showed Sawyer teaching in Black schools. His career in education began during this same year in Amherst County, Virginia. Reports to the Bureau showed heavy opposition to these schools. In fact, “Citizens of the Neighborhood” pulled down his schoolhouses in the course of their construction. Below are letters between Bureau agents concerning Sawyer’s schools.

(First two sections on the left)

Mr. Sawyer informs me that the house he has been erecting for a Freedmen School, has been pulled down, by Citizens of the Neighborhood. I called upon you Sir; as a Magistrate, for protection for Mr. Sawyer in the pursuit of his business, assuring you if the Civil Authorities fail to grant him protection, the, Military Force of the United States, will. I have directed Mr. Sawyer to return, go to work on his house, and if interfered with to notify me at once, and I will appeal directly to Richmond, for the means of protecting his school, and which can assure you will be forte coming. I will be up to investigate the matter, before reporting the case to Richmond.[1]

Only four records document this event. Only Sawyer knew the amount of opposition he faced, every attack, every insult, documented and undocumented. As historians, we fail to hold this privilege. By his second semi-annual report, Alvord spoke to the sentiment of white hostility toward Black schools and concluded, “Nothing, therefore by military force for some time to come, over on the alert and instantly available, will prevent the frequent outbreak of every form of violence.”

Until early 1868, Sawyer continued to operate schools in Churchville. He went on to teach near Vicksville, Southampton County. Alvord evaluated the schools of M.A. Andrews, Joseph J. Sawyer, and Evaline Briggs of Franklin, Zion, and White Oak School beginning in April. On his first visit he commented:

In my visit to these schools, I have been highly gratified with the progress, order, and general deportment of the pupils. I especially refer to the School at Franklin under the care of Mrs. Andrews. I cannot speak to much for her patience, care, tact and discipline. In addition to these day schools-there are four Sabbath Schools, well attended, and all engaged in the Christian duty of instructing and dispersing the bread of life to the poor benighted ones.[1]

At this school called Zion, Sawyer remained there from 1868 to 1870. His teacher reports provided a small glimpse into his classrooms, where he taught six hours a day to up to 74 children. He was also their only teacher. 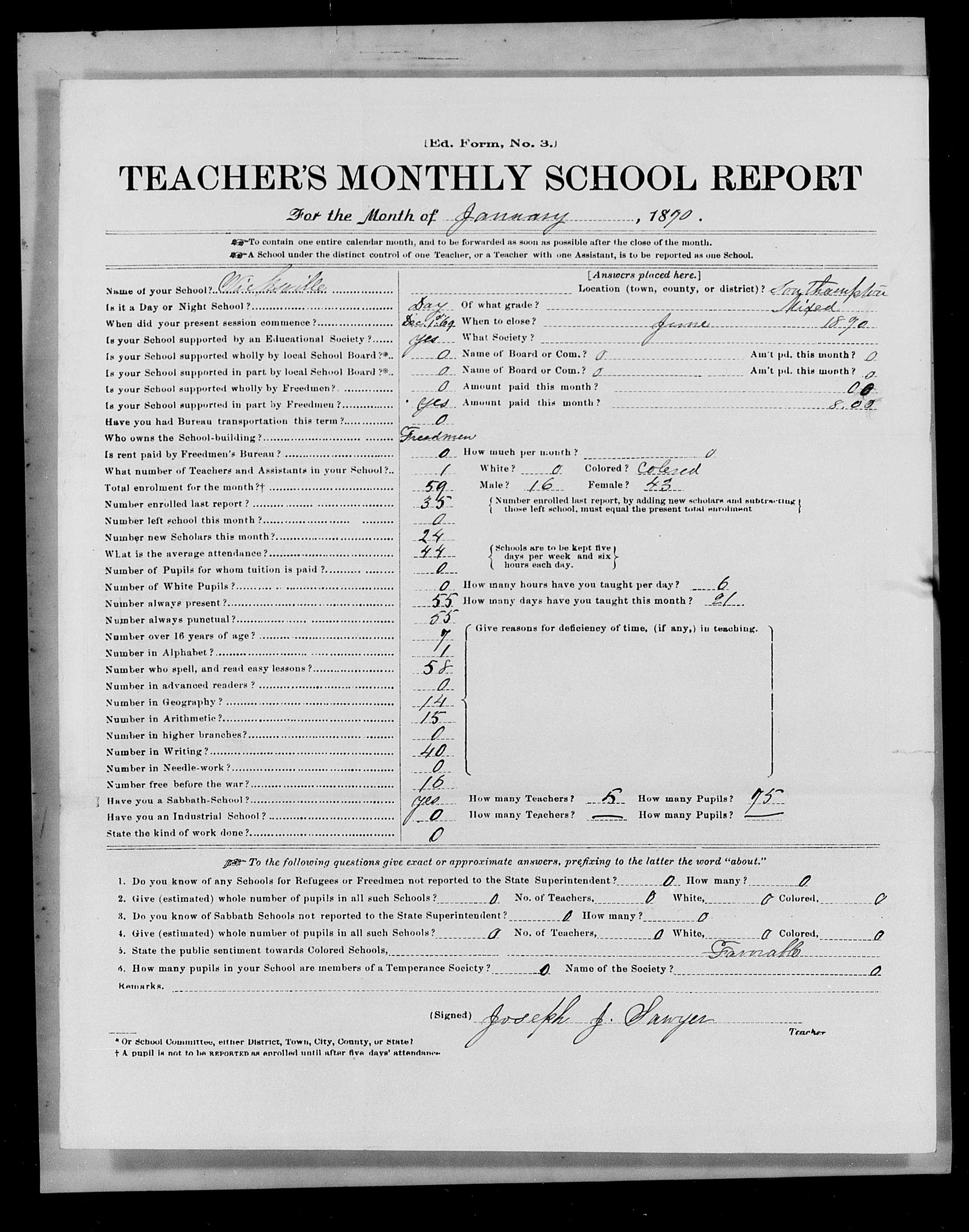 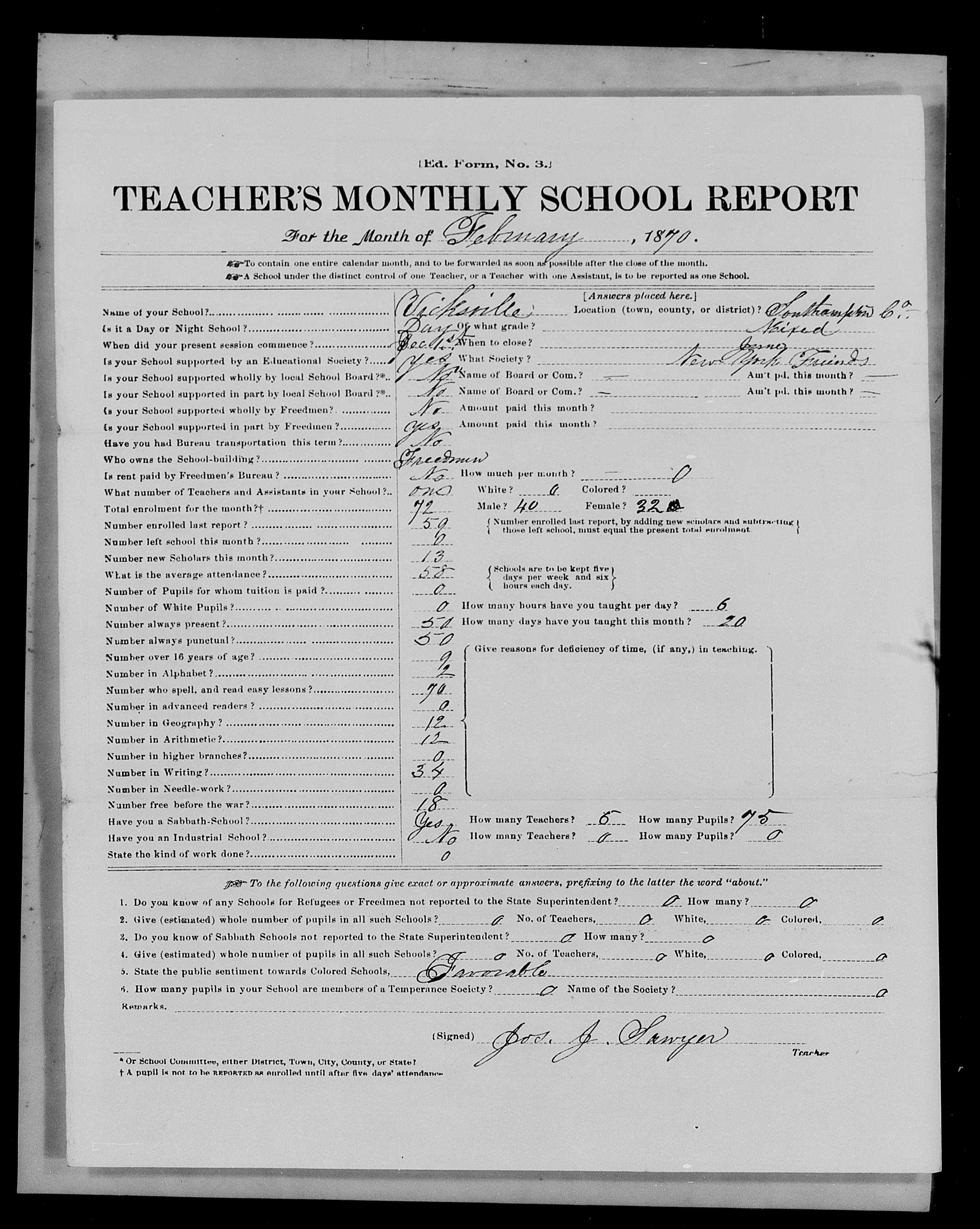 I concluded this section with the following words:

The above chart displays data from Sawyer’s monthly teacher reports during his last known school term, January 1870 to June 1870. His first documented class in June 1869 showed 47 children in his classrooms. By March 1870, Zion’s student enrollment reached its highest at 74 children. Black children and adults entered the classrooms ready to learn. Outside of this data, much is unknown about Sawyer’s teaching style, his students’ stories and background, and his overall experience, but he educated his people’s children and met their needs in Southampton County, Virginia. Southampton made its way into history through the infamous Nat Turner Rebellion which resulted in a statewide ban of enslaved and freed Blacks from attending religious services led by Black ministers and their education.About forty years later, Black children filled the schoolhouse educated by a Black preacher.

(paraphrased and I excluded footnotes)