For Evers: “His Is A Story That Must Be Told And Retold. Too Few Young People Know His Story, and That is a Tragedy Greater Than His UnTimely Death”

The above quotation comes from former Executive Director of the NAACP, Benjamin Hooks. After searching through dozens of catalogs for hours on Ancestry, I realized I needed a few more leads and decided to start reading.

For this research to be complete, I still need the following:

1. Potential slave owners. I searched first through the Freedman Bureau Records in both Mississippi and Georgia for Mike Evers and found no leads, which means he was most likely, there is still a slight possibility that he is not, born a slave.

My hope was to finish this research by the end of February, but then again I also planned on finishing my Flowers’ research in three weeks. No rush. No deadline. I enjoy doing this and it is better to take my time. To find some new information on Medgar and his family’s past, I decided to turn to a biography out of a few others written in 2011 by Michael Vinson Williams.

James’ father, Mike Evers…owned and farmed two hundred acres of corn, peanuts, and potatoes out in Scott County, [which whites later took ‘illegally’ from him regarding an issue of unpaid taxes] just west of Decatur…Mike Evers was rough, fought a lot, and taught Daddy to have no fear. Daddy’s mother, Mary Evers, was part Creole Indian, with long, straight hair and high cheekbones.”

What did I learn?
DO NOT MAKE YOUR OWN ASSUMPTIONS. In the beginning I did find a marriage record noting the union of Mike and Mary Evers, yet I dismissed it because I though she was too old in my opinion to have a child in 1885. I felt because her first children were born in the late 60s and early 70s that she most likely would not have a child in 1885. Now, I know women can have children even at that age, but I just felt the age gap was too large in this case. Once again, I was wrong.

Deleted Lizzie and Sandy Evers from the family tree and added Mary Horn Evers. With that I found the 1870 Federal Census for the family and Mike and Mary’s marriage record. Strange thing is that I cannot find the family in the neither the 1880 Census or the 1900 Census. Still searching=) 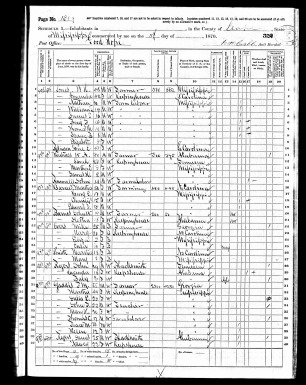 It is always nice to find the 1870 Federal Census for whomever you are searching for and if they are black/African-American you really hit the jackpot. The problem is, it doesn’t provide you with as much information as other census, but hey I will take it over nothing. James has two older sisters, Eula (bn. 1870) and Eliza (bn. 1868). Mike worked as a farmer along with nearly 80% of his neighbors (roughest estimate known to society). His wife listed her occupation as keeping house, I love when they put that down, that is a job. No home value is given, but the birthplace of Mike is Georgia (confirmed, it is also listed on 1930 Census) and his wife’s Mary birthplace is listed to be Mississippi. With that I now ventured into what I am now going to call “no man’s land”, searching for the family’s slave roots.

6 responses to “For Evers: “His Is A Story That Must Be Told And Retold. Too Few Young People Know His Story, and That is a Tragedy Greater Than His UnTimely Death””