Day One of the Civil Rights Bus Tour

June 10, 2017 commenced the Returning to the Roots of Civil Rights 16th Annual Tour. That morning our bus departed from Beaver Falls, Pennsylvania and nearly eight hours entered my home state of North Carolina. Fortunately, I am familiar with the history of this movement, yet despite my familiarity with the civil rights struggle, this does not erase or minimize my emotion. Anger, hurt, and pain, yet never disbelief. I lived in America long enough to understand my reality and my history as a Black person in this nation.

Our first stop was the campus of NC A&T, home of the Aggies.  The Greenborso Four statue rest on this campus honoring the actions of four students—Joseph Alfred McNeil, Ezell Blair Jr., Franklin Eugene McCain, and David L. Richmond–who launched the sit-in movement on February 1, 1960. On that day, these four young men, each 18 years old, purchased a few items from F.W Woolworth and Co. and proceeded to sit at the white-only lunch counter. When refused service, these four men in turn refused to leave. When Woolworth’s closed, McNeil, Blair, McCain, and Richmond returned the next students not only from A&T, but other surrounding schools joined these young men. Each protester faced physical and emotional violence from white city dwellers, yet prevailed in their protests. Beyond this region, other student-led protests erupted across America. 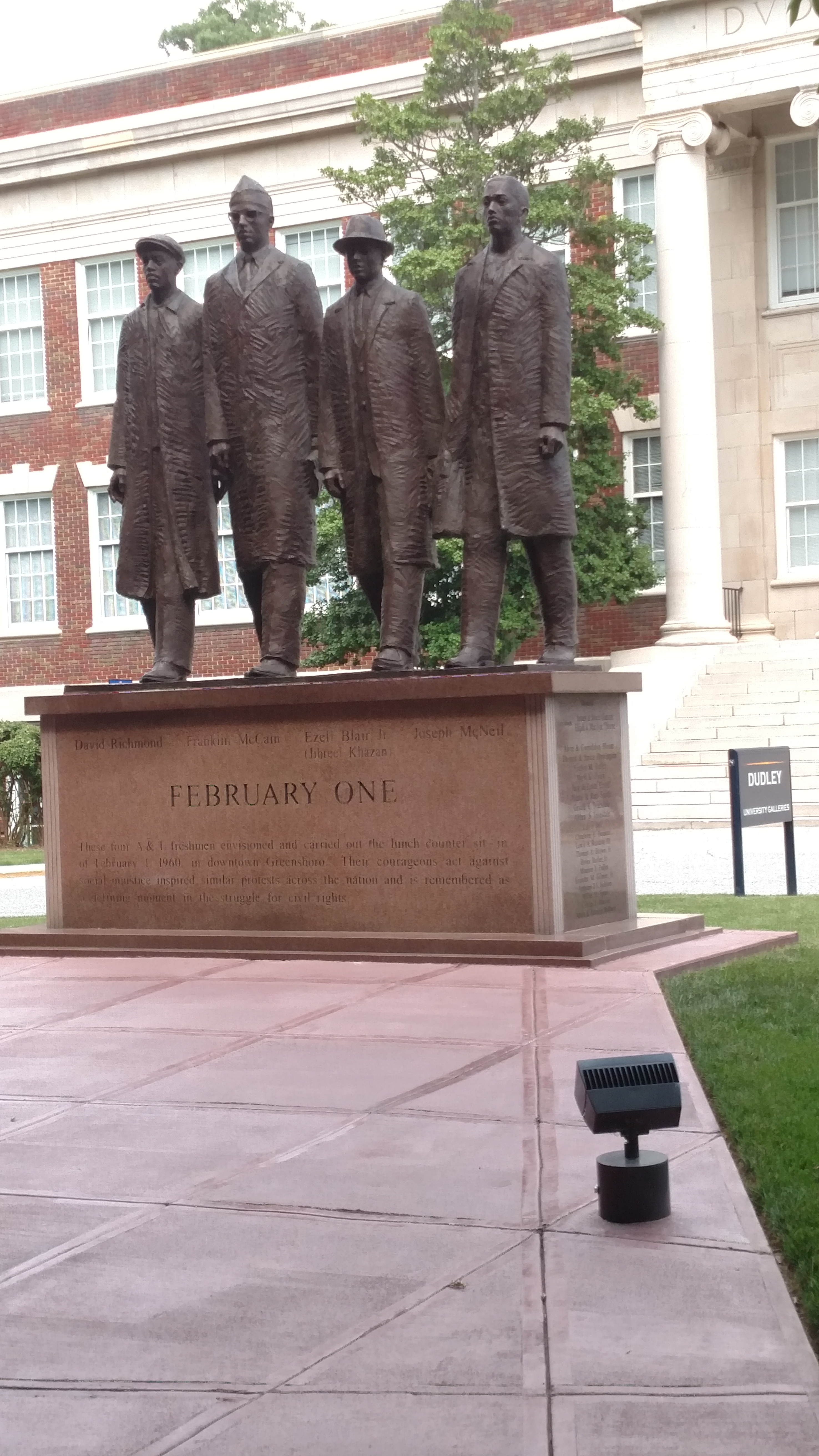 Our civil rights journey began there at the F.W. Woolworth and Company which is known today as the International Civil Rights Center and Museum in Greensboro. The tour was approximately 30 minutes and our first stop was right at the lunch counter. Following this exhibit, we continued on with our tour learning of local civil right activities and local activists as well as pivotal moments and key activists in the modern Civil Rights Movement. The most striking part of the exhibit was the old Coca-Cola machine. One machine, two sides—one for whites, the other for Black people. On the white side, a soda costed five cents, while the price doubled on the Black side. And this side held no refrigeration. The drinks came out the machine warm, not cold. A colored water fountain also stood within the exhibit as well as other indicators of segregation in Jim Crow America.

Our group continued throughout the museum viewing a blood-stain Klan hood, a replica of the Greensboro Four’s dorm room where they finalized their sit-in plans, and images of bombed churches. One of the most painful exhibits was the ‘Hall of Shame’. This exhibited featured large torn photos of pivotal civil rights moments. Two photos of lynching stood right in front of me. I kept looking down. Familiar images, yet I wanted to see no more. Each exhibit held a deep history of Black pain and Black resilience.

While traveling to Grensboro, I began reading Carolyn McKinstry’s While the World Watch: A Birmingham Bombing Survivor Comes of Age During the Civil Rights Movement. She wrote:

“Our neighborhood had been bombed before, but no one had ever been killed. Until now. The message gnawed away at the corners of our hearts. You can kill Black people. It’s okay because even if someone is arrested, no one goes to jail for it. Black life was cheap.”

As I reflected on the first day of the trip, my mind constantly went back to that last line. Just think about those words. Black life was cheap. I could not help to think how these words still rang true. Innocent Black men and women murdered and lynched. No indictments. No indictments for Emmitt Till’s killers. No indictments for George Wallace and Bull Connor’s actions. No indictments for the murders of Denise McNair, Vigil Ware, James Robinson, Addie Mae Collins, Carole Richardson, Medgar Evers, Viola Luzzo, Reverend George Lee, Jimmie Lee Jackson,  Lamar Smith, and countless of others. You may argue justice came at a later date, but in these cases justice was not on time. These killers continued to live their lives and either faced the courts at an old age or passed away before a second investigation. And the struggle for justice continues today. Latasha Harlins. Trayvon Martin. No indictment. LaQuan McDonald. Tamir Rice. DJ Henry. Renisha McBride. Terence Crutcher. The mysterious deaths of Kendrick Johnson and Lennon Lacy received no deep investigation. Must I go on. This first day only confirmed a painful trend in our nation, Black lives are cheap and they do not matter. Although it may seem like these covert acts of racism are of the past, they continue to take root today. City officials turned a blind eye to the lead poisoning the people’s water in Flint, Michigan, a predominately Black city. Voter suppression plagues the state of North Carolina. And Lennon Lacy mysterious hanging death was ruled a suicide with no further investigation in 2014. Black children continue to receive an unequal education. Yes, we are on the road toward progress; however, this nation is only a few miles from where it started on this journey.