A Revisit of Her Father’s Marriages: Harry Flowers and Nancy Sawyer

In the 1887 U.S. City Directory for Jacksonville, Florida, there is no spouse listed for Harry Flowers. There were no individuals of interest under Bradley or Sawyer.

Flowers, Harry F., US Cities and Directories, 1887
The only city directories where Harry is listed with Nancy is the 1902 and 1903 directories. Side Note–The 1902 directory misspells Nancy’s name (Nellie). 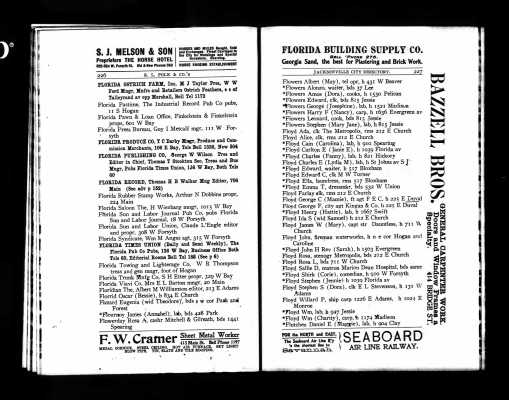 So, I have proof of an actually marriage; however, this leaves me with a huge gap in my research. If there first child was born in 1895, why is there no record of them? So with a leap of faith, I entered Nancy’s information into Family Search and found their marriage record.

Three years, it took me three years to find this all because someone spelled the names wrong. Nancy J.P. Sawyer and Henry F. Flowers were married on December 9, 1891 in St. Johns, Florida. This city is outside of Jacksonville, Florida. The last child of Harry and Lydia was born in 1888. What occurred between 1888 and 1891? A divorce is possible, deaths in the family, perhaps an illness caused the death of Lydia, Samuel, and Josie. Still, there is evidence of a Samuel Flowers residing in Florida born around 1875, yet only one child from his previous marriage was listed as a living relative in his obituary in 1928.
By 1912, Harry resided in Harrisburg, Pennsylvania. In the 1920 Federal Census, his household included  four of his children—Rachel, Vincent, Gladyce, and Hilda. He worked as a carpenter.

1920 Federal Census of the Household of Harry Flowers
Within this census record, his martial status is listed as widowed, the same status given on his death certificate. Did Harry marry someone between 1912 and 1920? It could have been a short marriage or maybe the term ‘divorce’ brought shame or embarrassment. With his second marriage ending in a divorce, Harry’s first marriage may have left him widowed and he identified more with that martial status then listing a divorce. At this point, it is all speculations and assumptions.
Again, answers produce more questions. One day I will solve the mysteries within this family’s history, but for now I have to go to bed.
Christina