What Do I Read?

I have always been an avid reader. Being a shy kid and not a huge fan of people, my refuge was found in a book. It took me to a world beyond what I knew and allowed me to travel to places both far and near. I love to read. My mind was filled with the words of Amazing Grace, Arthur, Goosebumps, Roll of Thunder, Hear My Cry, Little Women, Island of Blue Dolphins. Little House on the Prairie, A Tree Grows in Brooklyn. An American Tragedy, Go Tell It On the Mountain, Up From Slavery, Roots, A Golden Compass, The Autobiography of Malcolm X, Kindred, Their Eyes Were Watching God, 12 Years a Slave, I Know Why the Caged Bird Sings, Incidents in the Life of a Slave Girl, Push, Dreams from My Father, and For Colored Girls Who Have Considered Suicide When the Rainbow is Enuf.

Reading has kept me leveled, educated, and relaxed, especially when reading about other people’s issues. As a child, I was surrounded by African and African American folktales and novels, but enjoyed The Little House series. Do you remember learning why the mosquitos buzzed, or how about reading of Mufaro’s beautiful daughters or what caused the slaves to fly? I do! Today, I read mostly African and African American fiction and non-fiction, plays, poetry, and journal articles simply because it is my field of study and where my interests lies.

As I immersed myself in these reading, I am constantly challenging myself to read beyond bestsellers. I must read beyond Maya Angelou’s I Know Why the Caged Bird Sings, James Baldwin’s Go Tell It on The Mountain, Toni Morrison The Bluest Eyes, and Alice Walker’s The Color Purple. Weekly, I scour through the old shelves of bookstores for cheap classics and new reads. I will have trouble traveling back to NC with all of these books!

So, what have I/what am I currently reading?

The Third Life of Grange Copeland
In Love and Trouble
You Can’t Keep a Good Woman Down
Alice Walker
Next read: By the Light of My Father’s Smile and Once

She dreams; dragging herself across the world. A small girl in her mother’s white robe and veil, knee raised wait high through a bowl of quicksand soup. The man who stands beside her is against this standing on the front porch of her house, being married to the sound of cars whizzing by on highway 61.

we are gathered here

Like cotton to be weighed. Her fingers at the last minute busily removing dry leaves and twigs. Aware it is a superficial sweep.She knows he blames Mississippi for the respectful way the men turn their heads up in the yard, the women stand waiting and knowledgeable, their children held from mischief by teaching from the wrong God. He glares beyond them to the occupants of the cars, white faces glued to promises beyond a country wedding, noses thrust forward like dogs on a track. For him they usurp the wedding.

After reading Walker’s In Love and Trouble and You Can’t Keep a Good Woman Down, my interest in both reading  and writing short stories soar. It is always surprising to see the powerful and the thought provoking beauty of stories that comprise five to six pages of a book. The imagery, the deeply imbedded morals, and artistry is beyond words. Most were unfamiliar to my eyes while a few were small memories from college literature courses. . The novel, The Third Life of Grange Copeland, was also a powerful read. Sad, tragic, yet offer a glimpse into the personal effects of systematic racism, self-hatred, and patriarchy. If I ever teach, a few of the short stories will be a required read.

The Heart of a Woman
Dr. Maya Angelou
Next Reading: All God’s Children Need Traveling Shoes

“Abbey made a clucking sound with her tongue, and said, “The worst injury of slavery was that the white man took away the black man’s chance to be in charge of himself, his wife, and his family. Vus is teaching you that you’re not a man, no matter how strong you are. He’s going to make you into an African woman. Just watch it.” She dismissed the discussion and me. But she didn’t know the African women I had met in London or the legendary women in the African stories. I wanted to be a wife and to create a beautiful home to make my man happy, but there was more to life than being a diligent maid with a permanent pussy.”

This book written by a phenomenal woman gave me strength. Her first chapter begins with Billie Holiday visiting her home, she goes on to meet Malcolm X, Dr. King, and working with James Earl Jones. Phenomenal woman, indeed. Her grace, rawness, and honesty provides you with greater insight of her life. I was aware of her pregnancy and her son; however, I was not aware of her marriage to Vus. She writes of the oppressive nature of marriage, which filled my womanist heart with joy. Her strength and allowing herself to raise her voice is very much admired. I encourage everyone to read this book and to keep a journal nearby. It will make you think, laugh, and simply let go and embrace you. 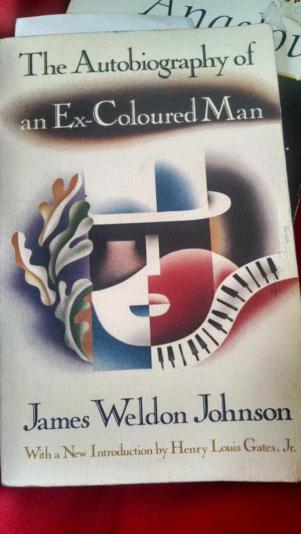 The Autobiography of an Ex-Coloured Man
James Weldon Johnson

I buried my head in her lap and blurted out: “Mother, mother, tell me, am I a nigger?” I could not see her face, but I knew the piece of work dropped to the floor and I felt her hands on my head. I looked up into her face and repeated: “Tell me, mother, am I a nigger?” There were tears in her eyes and I could see that she was suffering for me. And then it was that I looked at her critically for the first time. I had thought of her in a childish way only as the most beautiful woman in the world; now I looked at her searching for defects. I could see that her skin was almost brown, that her hair was not so soft as mine, and that she did differ in some way from the other ladies who came to the house; yet, even so, I could see that she was very beautiful, more beautiful than any of them….

James Weldon Johnson is the composer of the Black National Anthem “Lift Every Voice and Sing” and the first black professor at New York University. I was excited to read this novel after stumbling upon it in the bookstore. It is the first novel to be written by an African American in first person, which I first I did not believe. I was curious about the title and expected something completely different from what I had read. If you recall W.E.B. DuBois’ “double consciousness of the Negro”, this novel eloquently examines this term through the protagonist’s life, a man who can pass as white, yet challenges the question of race in a white society. It was first published anonymously in 1912 and later republished in 1927. 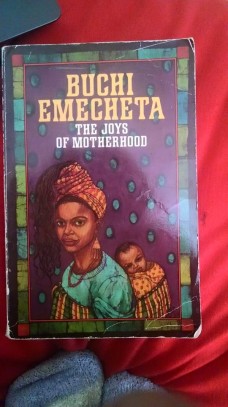 The Joys of Motherhood
Buchi Emecheta

Nnu Ego backed out of the room, her eyes unfocused and glazed, looking into vacancy. Her feet were light and she walked as if in a daze, not conscious of using those feet. He collided with the door, moved away from it and across the veranda, on to the green grass that formed part of the servants’ quarters. The grass was moist with dew under her bare feet….She now faced the road, having decided to use her eyes, her front instead of the back. She ran, her feet lighter still, as if her eyes now that she was using them gave her extra lightness. She ran past the master’s bungalow, past the side garden, and shot into the untarred gravel road; her senses were momentarily stunned by the colour of the road which seemed to be that of blood and water. She hurried on beyond this short road that led to the big tarred one, ran like someone pursued, looking behind her only once to make sure she was not being followed. She ran as if she would never stop.

This novel is by an extraordinary Nigerian writer who focuses on a traditional Nigerian woman, Nnu Ego,  in her village and her move to Lagos. It shows the adjustment a traditional Nigerian woman has to make during this time period in Lagos, a town that is becoming more contemporary due to colonization. This young woman is faced with another challenge because she is unable to bear children which makes her an incomplete woman in the eyes of Nigerians. As she is given the opportunity to be a mother, she realizes the great challenges that exist in completing the duties of a mother and wife. Emecheta is such an underrated author in this country. Now, this book has been on my bookshelf for years. It was actually my sister’s summer reading at Salem College. I decided to reread the book on a plane ride back home from North Carolina to Massachusetts. Surprisingly, I finished the book in about a week. Always pick up a non-Western book from time to time, especially if it is by Emecheta, she is a natural born writer.

I promised myself I would not buy another book until I read through the unread novels on my shelf. Then, I saw it, Toni Morrison’s new novel. I was not going to buy it. That was until I went to another bookstore and saw it again. I walked out of the store with the book and the receipt in my.

So this is what I am or have read in the past few months.