Recently, the Pennsylvania Historical and Museum Commission digitized the state’s death certificates from 1906 to 1944 onto Ancestry.com. At first, I was unsure of what to make of this. It is strange, in my opinion, for private records to be made public. I can recall the day I came across Hilda’s, Rachel’s sister, death certificate. It was interesting, yes, but it is something I would never upload to my blog. As a researcher, I must remember that this is someone’s aunt/uncle, wife/husband, or mother/father. This is not my family and I must respect how the Flowers would feel. With that being said, I will only post a portion of the death certificate (only the individuals’ names) to use as an introduction to each person. If you have an Ancestry subscription, you are free to search for these records, but as I stated before, you will not receive full access to these records from this post.

The first death certificate I found was Harry Florence Flowers’. Outside of the medical coroner, the remainder of this record was filled out by his daughter, Rachel Flowers. Here, I am finally given Harry’s actual birth date, February 23, 1845. He was 83 years old at the time of his death. His last occupation was listed as a carpenter and his father’s name was Harry Flowers; however, I believe this was a simple guess from Rachel. Sadly, there was no last address given. The search for the Flowers’ home continues.

This record was an incredible find in my research. As a result, I decided to see who else’s record I could find.

Chauncey, Harry’s and Nancy’s firstborn child, died on March 3, 1936 in Harrisburg, PA. He was born on April 12, 1895 and married to Ernestine Flowers. They had two children, Margaret and Chauncey Sawyer Jr.. His street address corresponds with the U.S. City Directory of Harrisburg in 1936. I could find not death certificates for his wife or children which means they passed away post-1945.

Prior to locating his death certificate, there was little I knew about Theodore W. Flowers. In fact, after reading this document, most of the information I had was false. Theodore passed away at the age of 30 years old in Philadelphia. He was born on March 16, 1903 to Harry Flowers and Nancy Sams and died on November 5th. He worked as a laborer. His wife was Irma Flowers (no maiden name). Even with this additional information, I was unable to locate any census records outside of the 1910 Federal Census document.

Searching through these death certificates confirmed the post-1945 deaths of the following individuals:

In the course of this week’s research, I had also been in contact with a professor who has been sending me multiple resources (thanks Dr. Huffman). One link stood out to me the most. It was an entry from a collection of Florida Marriages, 1837-1974, and it held the following information:

Lydia Bradley?! Shocking discovery. Nancy Sawyer, Rachel’s mother, was Harry’s second wife. I am going to be honest, this was not the first time I have been introduced to Mrs. Lydia. Earlier in the research, the 1880 Federal Census showed Harry Flowers living in Putnam County, Florida with his wife Lydia Flowers and their three children, Samuel, Mary, and Josie.

Perhaps you are wondering why I never considered Harry being married prior to meeting Nancy Sawyer. I kept it in mind, yes, but there was no concrete evidencing showing a marriage between Harry and Lydia until now. I searched for prior census records, marriage documents, and even what happened to their children and found nothing. Taking a leap of faith, I ran the names Samuel, Mary, and Josie Flowers through the PA Death Certificate database. There was one match—Mary Adell Conway. Now, if you have been following my blog for a while, you know I kicked myself in the face when I saw this.

Mary Adell Conway’s mother was Lydia Bradley and her father was Harry Flowers. Her husband was George Conway and  his name solved one of the biggest mysteries in this research. As in most obituaries, Harry’s surviving children were listed. The trouble came when their was an additional child listed, Mrs. George Conway. 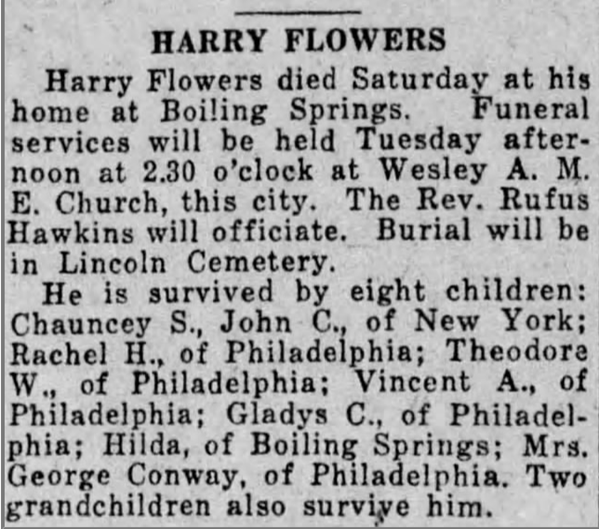 I had no idea who this individual. This name, Mrs. George Conway, appeared as a guest at events hosted by Rachel and her family and in Chauncey Flowers’ obituary as a surviving sibling. Mrs. George Conway was actually Mrs. Mary Adell Flowers Conway, Rachel’s eldest sister and Harry’s oldest daughter. Now, I must determine what happened to Lydia Bradley and her two other children.