I wish I could say I was relaxing my senior year, you know taking it easy, enjoying life, and spending my last moments as a young adult with my friends. I wish that was the case. At a point, I should stop complaining and actually use my mouth to speak about some change. Taking 18 credits, working 28 hours, and being on SGA is taking it toll, but I signed up for it. I can handle it, yet what I really need to start doing is making sure I am investing in my future; therefore, I really need to step up my game when it comes to applying for graduate school as well as considering my backup options.

So, I do not have many options at the moment. I will, however, cut my graduate school list to three universities: Duke, UNC Chapel-Hill, and the University of South Carolina. Notice the location, yes I am returning closer to home. I miss my family especially my grandmother and great-grandmother. Its not much fun seeing your family only during Christmas break. Who knows maybe Harvard will reappear on the list.

With all that being said, let us start on these short introductions. As a result of winning the library grant, I have to do a poster presentation. Cool…no. It is hard to take a snapshot of the lives of Rachel, Vincent, Hilda, and Geraldine when they accomplish so much. It was hard work, but it is done.

“The Negro has excelled in music—having created the only music native to America—the spiritual; literature, poetry, art, and fiction. What profession is there today that the Negro is not capable of filling? He is optimistic, race conscious, and desires the rights and privileges granted to other Americans.”

Born the eldest daughter of Civil War Sergeant Harry Florence Flowers, Rachel migrated with her family from Jacksonville, Florida to a small farm in Boiling Springs, Pennsylvania in 1913. She enrolled at Boiling Springs High School and in 1916 created history by becoming the first African American student to attend Messiah College, known to Rachel as Messiah Bible School and Missionary Training Home. After her time at Messiah, Rachel became a prominent local figure overcoming the racial status quo through her involvement in social organizations, sports, and theatre. Rachel also used her talents to pursue a life of activism against the racial inequality prevalent throughout the nation particularly in the Philadelphia school system using her pen and voice to strike against injustice. Rachel served as a member at Wesley Union A.M.E. Zion Church in Harrisburg as well as Saint Philip Lutheran Church in Philadelphia where she served as choir director. In 1988, Rachel passed away leaving behind a rich and largely untold legacy of a faithful servant leader within her community and family.

Vincent Flowers was always a lover of nature, but after a very sad experience some years ago, he holds a deeper respect than ever for trees covered with poison ivy vines.

Following his sister’s bold steps in 1923 Vincent Flowers would become the first African American male to enroll at Messiah Bible School graduating in 1927. During the Second World War, Vincent enlisted in the army serving three years in the South Pacific. Years following his time in service, Vincent encountered another war. This war was a battle against discrimination. Following an incident on August 29, 1950, Vincent along with the National Association for the Advancement of Colored People (NAACP), filed a report against a local restaurant. In this establishment, Vincent was refused service when a waiter told him “we do not serve Negroes.” This event displays Vincent’s courageous character and his refusal to settle for injustice. Vincent passed away in December of 2002 in Broomall, Pennsylvania. Although much of Vincent’s life remains unknown, what we now know will serve as an inspiration to many as we continue to uncover the history of our alumni. 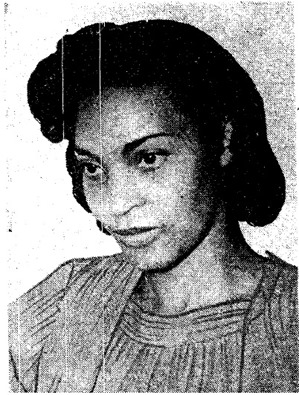 “She will be remembered for her strength, her humor, her determination, her honesty, her warmth, her supportiveness, and her sense of Justice.”
Geraldine Wilson, daughter, 1975

Hilda Clifford Flowers Wilson is the youngest child within the Flowers family and according to local newspapers she was also the most popular. She was raised primarily by her father who instilled in his children an ethic of justice and moral right. Upon her father’s death in 1928, Hilda, as well as her other siblings, pursued selfless lives of service that would have made their father proud. In 1931, she married, Herbert Wilson and together they had three children, Geraldine, Herbert, Jr., and Harry Wilson. Due to Hilda’s active role in social organizations within Philadelphia and her commitment towards racial reconciliation, Hilda was asked in 1963 to lead the Philadelphia chapter of the Student Nonviolent Coordinating Committee (SNCC). In 1965, Hilda felt led to Mississippi, a place she would call home until her death in 1975. In the Mississippi Delta region, Hilda worked with the Poor People’s Corporation (PPC), the Friends of the Children of Mississippi Head Start Programs, and as a consultant on black history. Her work with PPC is documented in the book, Women in the Civil Rights Movement, Trailblazers and Torchbearers 1941-1965. Her life served as an example to all, but importantly her life served as an example to her eldest child, Geraldine Louise Wilson.

“Knowing Black history means: that we understand why our history was distorted and ignored, that we learn who distorted our history and why, that we discover who profited from distorting history and how they profited, that we know how long and how hard Black people have struggled against bondage, that we know as surely as we know our name that the children of Africa are as old as man himself.”

Niece of Rachel and Vincent Flowers, Geraldine Louise Wilson was raised in Philadelphia attending Girls’ High School and in 1955 graduating from Temple University with a degree reflecting her true passion—early childhood development. After teaching within the Philadelphia public school system, Geraldine decided to walk down a new path in her life, civil rights. In 1964, Geraldine travelled to Albany, Georgia and the Mississippi Delta with SNCC. She would never forget the fear she felt travelling down the roads where civil rights activist were beaten and even murdered for their work towards equality. In 1966, Geraldine left to New York where she served as the Education Director and Executive Director of Head Start programs. Following this position, Geraldine was accepted at New York University’s School of Education where she received her Masters’ in Group Dynamics and Human Relations. She continued to work on her doctoral dissertation at NYU and served as the Director of the Regional Training Office for Head Start Programs until her untimely death in 1986. Over time Geraldine became known as a leading consultant providing services to national children’s organizations, corporations, universities, and school systems tackling issues pertaining to the growth and development of young black children. Geraldine pursued a life of stewardship displayed in her work towards reconciliation through service and activism—a trait that runs in her family.

Enjoy
Check out a surprise in a future post concerning the first international students.

One response to “Short Introduction”